MIDTERM RESEARCH PROGRAM
Midterm research program will be focused on visual observation of Shark’s Behavior, Shark Fidelity, Correlation between Sharks and their habitat, etc. This normally consists of one-year period of visual observation on the typical species of shark (e.g. grey shark) in such specific area. 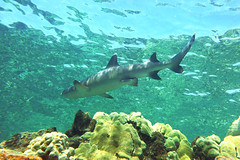