Because of their snout, sawsharks can sometimes be confused with sawfishes. However, the sawshark’s gills are on the side of its head, while the sawfish’s gills are underneath. Also, the sawfish does not have a pair of barbels.

These sharks are found in waters from the western North Atlantic in the vicinity of the Bahamas to the southeastern Atlantic, in the western Indian Ocean from South Africa to southern Mozambique, and in he western Pacific off Japan, the Koreas, China, the Philippines and Australia.

Sawsharks first appeared in the fossil record during the late Cretaceous of Lebanon, about 90 million years ago, and were more widespread, in the eastern Pacific and eastern North Atlantic.

The newly discovered species, named Pristiophorus lanae, is the second member of the genus Pristiophorus described from the western North Pacific.

“The species name, lanae, is after shark enthusiast Lana Ebert on the occasion of her graduation from the University of San Francisco. The proposed common name is the Lana’s Sawshark,” co-authors Dr David Ebert from the Moss Landing Marine Laboratories, California Academy of Sciences and the South African Institute for Aquatic Biodiversity, and Dr Hana Wilms from the University of California wrote in a paper published in the journal Zootaxa (paper in .pdf).

Pristiophorus lanae is a slender-bodied five-gilled sawshark, measuring up to 80-85 cm in length. It is known from seven specimens (six females and a single male), caught off Zamboanguita, Apo Island between Negros and Siquijor, and off southern Luzon in Balayan Bay and Ragay Gulf, the Philippine Islands. 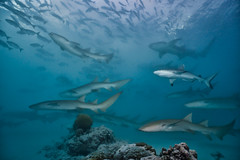