Whitetip Reef Shark can grow to about 200 cm; males and females mature at 112–118 and 114–122 cm respectively; born at 52–60 cm. A reef-associated shark resting on or near the bottom in caves and crevices on coral reefs during the day, usually in clear shallow water in depths of 8–40 m, but has also been reported from a depth of 330 m. Viviparous, with a yolk-sac placenta; gives birth to litters of about 2 or 3 pups (maximum 5) after a 10–12 month gestation period. Curious but rarely aggressive species. Known to be ciguatoxic in rare circumstances. 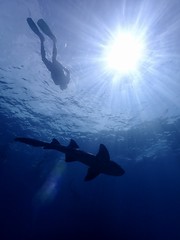